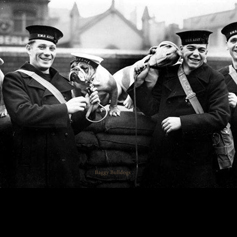 The Bulldog is known to be a mascot for many things like sport clubs and universities. But probably the oldest and most well known mascot is the  Navy and Army Bulldog. So how did the Bulldog become the Marine, Navy & Army mascot?

The year was 1917 when America declared war against Germany and joined allied forces in France in World War I. The first real test in battle for the United States Marine Corps was the battle at Belleau Wood in 1918.

The Germans had advanced to within 50 miles of Paris. The battle raged for almost a month before the Marines were finally victorious. General Pershing said it was the most important battle fought by American forces since the Civil War. It was during the battle of Belleau Wood where the fighting spirit of the Marines and soon to be mascot, the English Bulldog, became synonymous.

According to stories, the Marines fought with such tenacity that the Germans nicknamed the Americans “Teufelhunden” or “Devil Dogs.” In german folklore, devil dogs were wild mountain dogs.

The battle at Belleau Wood was real, but the German nickname was based on mythology. However, it wasn’t long before a recruiting poster painted by Charles Falls appeared showing a dachshund wearing a spiked helmet and Iron Cross running from an English Bulldog wearing a helmet with the globe and anchor insignia on it.

Written on the poster was “Teufelhunden, Devil Dog Recruiting Station.” The poster was embraced by the Marine Corps and the public.

The first unofficial mascot, King Bulwark, was an English Bulldog pup sired by Rob Roy. He was born on May 22, in 1922, the pup’s royal registered name was quickly changed to Jiggs. Private Jiggs was enlisted into the United States Marine Corps at a formal ceremony on October 14, 1922 by Brigadier General Smedley Butler.

Jiggs quickly rose through the ranks. His promotion to corporal came less than three weeks after his enlistment. On New Year’s Day 1924, he was given the rank of Sergeant and was promoted to Sergeant Major in July 1924.

Jiggs received worldwide recognition and appeared at sporting events where Marines played and everywhere else where his presence might draw public attention and enhance the morale and spirit of Marines. Many Marine athletic teams were called Fighting Bulldogs.

Unfortunately, Jiggs had a rebellious streak. He was court-martialed several times for lack of proper manners, but he was always forgiven and his rank reinstated. The pampered pooch lived his life in the limelight, even starring with Lon Chaney in the 1926 movie, “Tell It To the Marines.”

Jiggs passed away January 9, 1927 just four months shy of his fifth birthday. Two Marines stood guard over Sgt. Maj. Jiggs as he lay in state in a hanger at Quantico, Virginia. Flowers from his many fans surrounded his satin lined coffin. He was mourned throughout the Marine Corps and buried with full military honors.

After the passing of Jiggs, his replacement was donated by heavyweight boxing champ James “Gene” Tunney, (photo below) a former Marine who had fought in France.

Jiggs II was not a disciplined Marine in any sense of the word. He chased people and bit them, and had no respect for authority. Apparently, the boring life of a recruit hanging around the barracks wasn’t exciting enough for him. He passed away in 1928 after one of his many terrorizing rampages.

From the 1930s to the early 1950s, all Bulldog mascots were named Smedley, in honor of General Smedley Butler. Beginning in 1957, new mascots were named Chesty, a tribute to Lt. Gen. Lewis “Chesty” Puller, Jr., the most decorated Marine in history who earned five Navy Crosses throughout his distinguished military career.

On July 5, 1957 the first Chesty, decked out in specially made Dress Blues, made his first public appearance at the very first Friday Evening Parade at the Marine Corps Barracks in Washington DC and immediately won the hearts of the media.

Chesty II was a rebel and refused to follow orders. He was always in trouble, even going AWOL for two days. He was returned to base in a police paddy wagon.

However, he was successful at siring a litter of pups, one of which became his replacement.

Chesty III was the exact opposite of his father and became a model U.S. Marine. Neighborhood children adored him and he returned their affection, earning him a Good Conduct Medal. Since Chesty III, each Bulldog that has followed have been worthy of their stripes as official mascots of the United States Marines. If I am correct we are currently at Chesty the 16th, he lives at the Marine Barracks, Washington, D.C., where he appears in weekly parades.

The official Marine Corps motto is ‘Semper Fidelis’ or ‘Semper Fi’ meaning Always Faithful. Although the English Bulldog nowadays is known to rather avoid a fight, the Bulldogs from those days were known to be tenacious and to never give up.

Their loyal and faithful character still remains today, they are as faithful as can be, which is why the Bulldog is the perfect mascot for the Marine Corps.

Besides being a US. Marince corps mascot
several other countries also adopted
the English Bulldog as their Army or Marine Mascot.

Check out our other Bulldog photo collections:

Do you have an Army or Navy Bulldog photo you would like to add?
Upload your Bully Marine or Soldier in the Baggy Bulldog Forum

One thought on “Army & Marine Bulldogs”