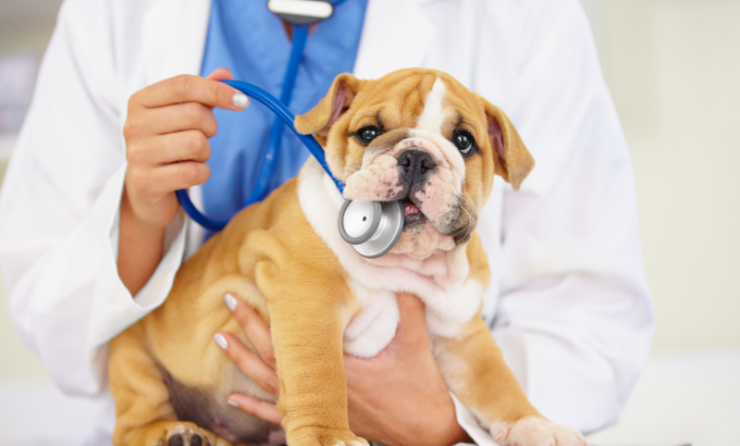 What is GDV or Bloat?

Gastric dilatation-volvulus (GDV) is also known as bloat or stomach torsion. Bloat is a very serious health risk for many dogs, yet many dog owners are not aware of it. It is the second leading killer of dogs, after cancer. Bloat is an extremely serious medical condition and should be considered a life threatening emergency.

This is a condition that commonly affects dogs with barrel chests and small waists like Bulldogs. Gastric torsion and bloating occurs when the stomach become dilated (bloating) due to excess air filling the stomach. The stomach muscle turns on the ligaments supporting it, which results in the blood supply to the stomach getting cut off. A dog with symptoms of bloat needs to see the veterinarian right away or the dog’s health will rapidly deteriorate and the dog can die within hours.

It is unknown what causes gastric torsion and bloating, but there are a few things you can do to reduce the risk of your Bulldog being affected:

• Prevent the dog from drinking large amounts of water in one go, especially before and after eating

• Sprinkle some crunchy food in with whatever you feed your dog, this encourages more chewing and again slows down the eating process

The gastric dilatation (bloat) is the first part of the condition and the volvulus or torsion is the second part. In bloat the stomach fills up with air and puts pressure on the other organs and diaphragm. This makes it difficult for the dog to breathe, and compresses large veins in the abdomen preventing blood from returning to the heart. Filled with air, the stomach can easily rotate on itself, thus pinching off the blood supply. As the stomach swells, it may rotate 90° to 360°.

Once this rotation occurs and the blood supply is cut off, the stomach filled with air, begins to die and the entire blood supply is disrupted and the animal’s condition begins to deteriorate very rapidly. The bloated stomach obstructs veins in the abdomen, leading to low blood pressure, shock, and damage to internal organs. The combined effect can quickly kill a dog.

The exact cause for bloating isn’t really known but the most accepted theories are that the dog has eaten an exceptionally large meal, ate too fast, drank lots of water before or after a meal or exercised shortly after a meal.

The most noticeable symptoms are the grossly distended abdomen (it will swell up in a short period of time and the abdomen will feel hard), unsuccessful vomiting meaning either nothing comes up or possibly just foam and/or mucous comes up, extreme restlessness (may refuse to lie down or even sit down, may stand spread-legged), pacing, coughing, excessive salivation and drooling, having a hunched up appearance, whining or cries of pain.

These symptoms will occur during or right after eating their food or drinking water. Unfortunately owners often don’t recognize the problem until it is too late. For the dog to be saved, the owner must notice the symptoms of gastric torsion or bloat in an early stage to have any chance of saving their dog. If the condition is not caught early enough, the dog will usually goes into shock, become comatose and die.

If this is caught by a veterinarian in time, a large tube can be feed down the dog’s esophagus and on into the stomach. If the procedure works you can hear an audible hiss of escaping gas. If the distention is not caused by gas but by liquid and/or food, the same tube will be used to pump/empty the stomach and provide immediate relief to the dog.

The owners will usually be told to leave the animal for observation to make sure the distention doesn’t reoccur. There are times when the tube will not pass and another aspect of bloat occurs.

If you have been able to get the dog to the veterinarian early enough, and relief isn’t seen by passing the tube, surgery becomes the only option. Again, this is a condition where minutes make the difference between life and what is an agonizing death.

It must be remembered that at this point even with surgery, the chances of survival are not that great. In general the dogs that can be saved are the ones where the owner recognizes the symptoms in a very early stage so that surgery can be avoided. So please remember the symptoms mentioned above, one day this might save your dog!

For the surgery the veterinarian will shave and prep the abdominal area and make a large incision down the midline of the dog. He will then proceed to pull the intestines and stomach out and lay them on the surgery table. Once the abdomen is opened up and the necessary area is exposed, the vet will then untwist the stomach and check the stomach and intestines for necrotic areas. If any are found, he or she will usually recommend the dog be euthanized. If no dead tissue is found, he will suture or tack the stomach to the abdominal wall.

This tacking is done in the hopes of preventing the dog’s stomach from once again twisting. Once the stomach is tacked, the doctor will replace the intestines and proceed in closing the abdomen. From this point, it will be a matter of wait and see as to whether the dog survives. After the procedure the owners will receive instructions as to the special dietary and feeding needs of the dog. Usually, the doctor will recommend several small meals as opposed to one large meal during the day, placing the food at an elevated level, moistening any dry food so the dog will feel full quicker and limiting the availability of water after eating. For those dogs lucky enough to survive their ordeal, they will normally go on to live long, healthy lives giving years of companionship to their owners.

GDV or Bloat in dogs is a medical condition that needs more attention, remember this condition is the second largest killer among dogs, yet a lot of dog owners are not familiar with this condition. With this blog I hope that dog owners will share and remember, so that people are aware of the risks, symptoms and know what to do when it happens. This can save the lives of many dogs.

Unfortunately I have had experience with this, as a dog owner, with one of my Bulldogs: Miss Bean. She had a stomach bloat twice. At first the veterinarian was able to empty the stomach with a tube but a week after the treatment the bloat returned and her stomach turned and the veterinarian was not able to do anything for her anymore. In the x ray photos below you can see the difference of the size of her stomach before and after she received her first treatment. You can see that in the first photo the stomach is so swollen that you cannot even see any other intestines, you can also see that the area shows in black,which is the air. In the second x ray you can see the reduction in size and that the air is released and the area is colored white again.

So also in loving memory of my Bulldog Miss Bean, I hope this Blog can make a difference for other dogs and owners.

In loving memory of Misses Bean ♥

2 thoughts on “Bloat in Dogs”