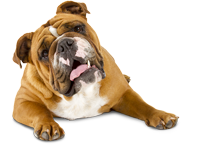 This blog is to give more insight
into the Bulldog’s character.
Let me start by stating
that no Bulldog is the same.

These numbers are based
on averages and based on
my own personal experiences with Bulldogs
in over 20 years of having them as pets
and my experience as a foster parent
and dog trainer for the Baggy Bulldog Rescue.

Are you thinking about adopting a Bulldog?
These characteristics and stats will help
you understand the Bulldog’s character and needs.

Are you an experienced Bulldog owner?
Let us know if you agree with these stats
and let us know if we missed anything
in the comments or on the Bulldog Forum

When choosing the perfect pooch
for your apartment, you should also
take into consideration the dog’s
energy level, noisiness, and friendliness.

The Bulldog is the ideal dog for city living.
Their mellow personalities
fit right in with city life.

They are content, they rarely bark, are very social
and don’t require much exercise.
Daily walks and lots of cuddles
and they’re all set.

The Bulldog is often labeled
as a dumb and untrainable dog

This is not true!
Bulldogs are in fact very easy to train
and they are also very smart
However what works for most dogs
will often not work with Bulldogs.

So even an experienced dog owner
who owned different dog breeds
can still be an unexperienced owner
when it comes to Bulldogs.

A Bulldog will need a soft approach
and may need some more repetitions
before a command is learned.
But a Bulldog will never forget
anything he or she learned.

good to know is that
Bulldogs are always open for bribes
so rewarding good behaviour
with treats, cuddles or toys
is key in training them.

A lot of people label the Bulldog
as stubborn, but in my personal opinion,
they are not stubborn
but they do have a strong will.
A Bulldog has to see the purpose
of an action or following a command,
if not, it will refuse.

Bulldogs are real thinkers.
You don’t give commands to a Bulldog
you come to agreements with them 😉

If you want to learn more
on how to train your Bulldog,
check out the Bulldog Training section

The Bulldog might look tough in appearance
but in reality is not tough at all.
Bulldogs are very emotional dogs.
They easily pick up on
human vibes and emotions.

They are easily scared
and can be real wimps.
Bulldogs can not handle change very well
so a slight change in your daily routine
or even your new furniture can scare your Bulldog

A Bulldog loves to relax and chill
they are couchpotatoes in dogform 😉
However the Bulldog is real needy
when it comes to attention
A Bulldog is the happiest
when it’s with his family.

Eventhough the Bulldog can easily be left alone
please dont leave them alone too long
as said before the Bulldog is the happiest as can be
when it’s with his family.

Bulldogs love their family.
You can all have all the toys and treats in the world
But a Bulldog is the happiest when it’s with his family.

They just want to be around you all day,
want to join in on any activities
will be curious of everything you do
in and around the house

They are exceptionally social dogs
and really need human interaction
wether it is playing, cuddling or
simply being there with you

Bulldogs love kids and are a perfect family dog.
The only reason why the Bulldog gets 4 out of 5 stars
is that they can be plump and get wild with playing
and easily knock over someone in their enthousiasm

Beacuse of their social nature
they will make the best office dog,
make friends with everyone
Greeting every human with lot of love and enthousiasm
is the Bulldog’s speciality

When going to the dogpark the Bulldog will usually
first greet all the humans around
before even saying hi to the other dogs.

Bulldogs can be very playful
and often have a little rebel in them.
If you don’t give them enough attention
they will let you know and demand some lovin’

So if you think
you can boss a Bulldog around
think again!

I love these little rebels.
Check out some more Rebels in
the Hall of Shame

They are also very laid back and relaxed
I often say they are the rasta’s in dogform with their
‘laid back’, ‘no worries’ and ‘peace and harmony’ mentality

To me, these little rebel rasta’s are the best dogs!
I love all dogs but there are dogs and there are Bulldogs.

Let us know what do you think!

What is the most remarkable trait of the Bulldog’s character?
And in what ways are Bulldogs different from other dogs?
Why did you fell in love with the Bulldog breed?

The Character of the English Bulldog

What makes the Bulldog so special?